Why Choose a Telehandler for Snow Removal

Skid steers, wheel loaders, and industrial tractors were not designed for snow removal, yet these machines are all commonly employed by snow removal services. Telehandlers are another piece of equipment that is particularly useful when the flakes start to fly. Much like the aforementioned equipment, telehandlers weren’t originally intended for snow removal, but the versatility that’s driven their popularity in other areas on the job site makes them fantastic for this application. 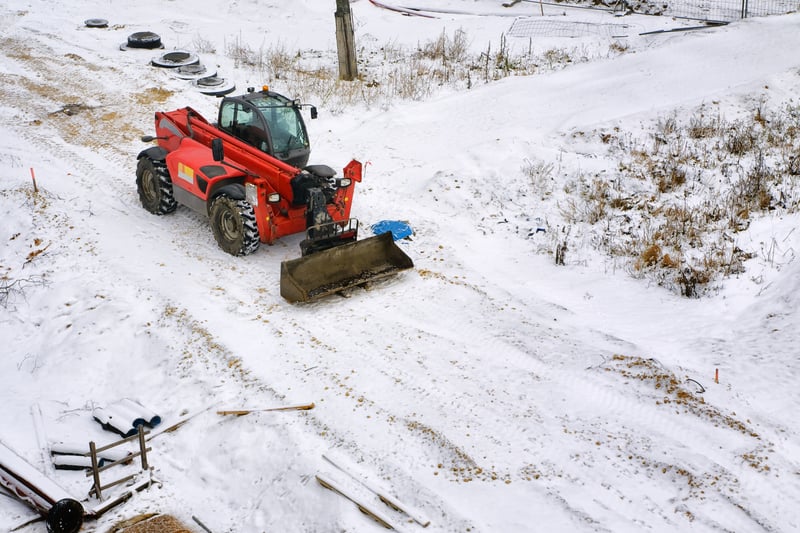 Telehandlers move snow with the same efficiency that they shuttle construction supplies around building sites, hay bales across the farm, or pallets around the warehouse. Furthermore, the ability of telehandlers to both push like a tractor or truck, as well as scoop and lift like a wheel loader (but even higher), makes them particularly useful in snow removal.

Telehandlers rise above other equipment when the going gets deep and the snow needs to get stacked high or removed. The extending boom of a telehandler allows the machine to create high snow piles, which is particularly useful in places with limited space. In situations where the snow is already stacked high, telehandlers can reach up and over existing piles to put snow behind them, and they make quick work of filling dump trucks in instances when snow needs to be moved off site.

With lifting capacities between 4,000 and 6,000 pounds for compact telehandlers, and upward of 12,000 for full-size machines, telehandlers are able to move massive amounts of materials. A cubic yard of snow weighs roughly 1,200 pounds, meaning even telehandlers on the low end of lifting power can pick up big buckets of snow.

It’s not just in air, lifting loads up and down, where telehandlers excel. Telehandlers also shine on the ground, where their maneuverability—they’re able to work in tight spaces and make sharp turns—allows them to work in a wide range of areas, from residential driveways to large commercial parking lots. Telehandlers also feature four-wheel drive for work in all types of terrain, including snow.

Telehandlers can operate at speeds exceeding 20 miles per hour, which makes them capable of traveling roughly twice as fast as skid steers. Consequently, telehandlers are especially useful for operations that clear large lots and require equipment to travel from site to site on the road, as they cut down on travel time and improve productivity. This is a benefit that operators appreciate whether they’re working to keep up when the snow is piling up or hustling to meet their obligations.

For all of the advantages offered by telehandlers to snow removal services, there is no penalty when it comes to fuel efficiency. Telehandlers are competitive with skid steers, wheel loaders, and tractors when it comes to fuel consumption, meaning less stopping to fuel up, greater productivity, and more money in operators’ pockets at the end of the day.

The adeptness of telehandlers in snow removal isn’t lost on manufacturers, who offer a wide range of attachments for winter work, such as:

Because telehandlers are used in such a broad spectrum of applications, including snow, tire manufacturers are now making a wide variety of tire types available for them—for example, pneumatic, solid, and foam-filled—and, as always, choosing the right tire can make a big difference on the balance sheet at the end of a long winter.

Pneumatic radial tires, such as the Alliance 585, are a good match for hard-surface work such as snow removal. Radial tires dissipate heat better than bias tires, allowing telehandlers to fully take advantage of their ability to travel at higher speeds while their larger footprint increases traction, reduces slipping in the snow, and improves fuel efficiency. They also provide a more comfortable ride than other types of tires, enhancing operator comfort—particularly important during those seemingly never-ending storm cycles. Check out our blog, Why Switch Compact Construction Equipment to Radial Tires?, to learn more about the benefits of radial tires.

To learn more about our extensive line of application-specific telehandler tires—from radials like the Alliance 585 to bias-ply offerings like the Galaxy Giraffe XLW and Giraffe ND—and how they can boost the efficiency and productivity of all types of operations, not just snow removal, contact your local dealer or rep today.