What to Look for in an Implement Tire

It’s easy to overlook implement tires, especially considering that equipment like planters, tillage, and carts spend a relatively small amount of time in the field compared to the tractors that pull them. But choosing application-specific implement tires is key to unlocking a tractor’s full potential. After all, the speed, load, and compaction-reducing benefits of high-tech tractor tires can be diminished if the implements they’re pulling aren’t equipped with tires equal to the task. 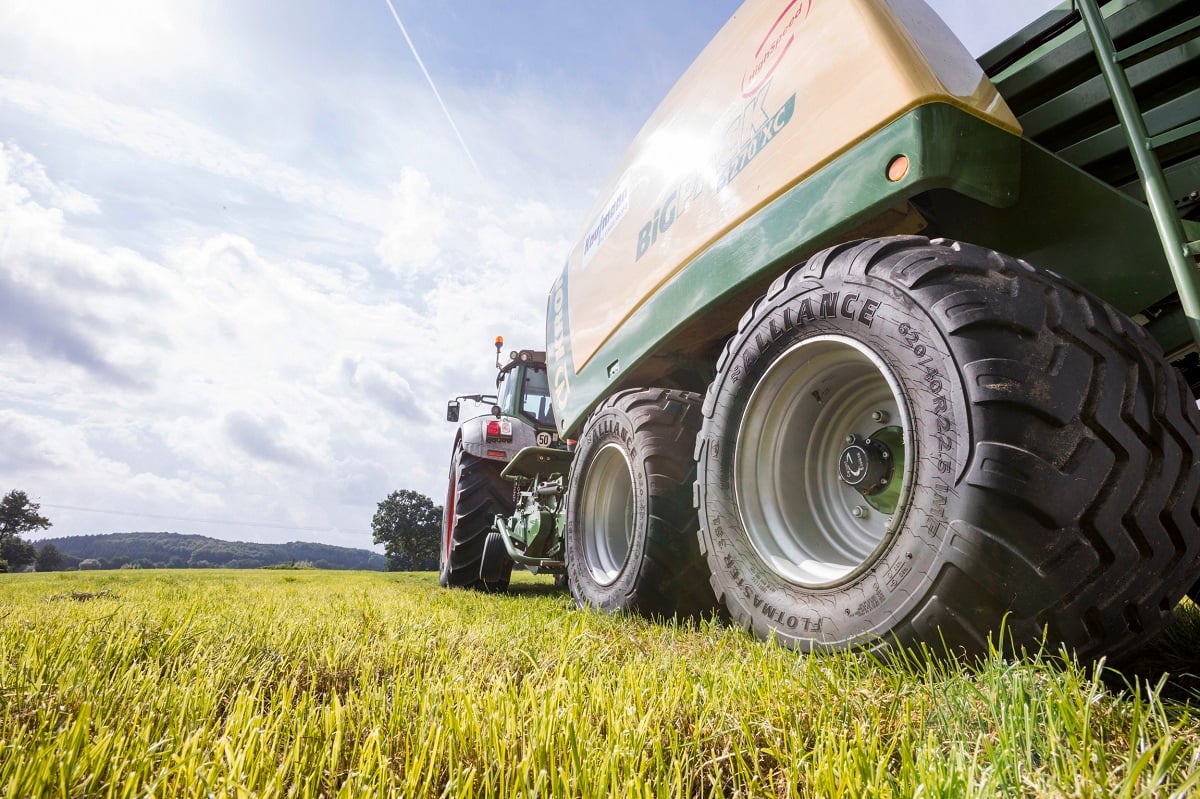 The Importance of Implement Tires

In recent years, implements have grown in size and weight while often needing to be towed at relatively high speeds between widely spaced fields. Consequently, today’s implement tires must have the ability to perform both in the field and on the road—providing traction and minimizing compaction on clay, loam, and silty soils while also being able to travel at road speeds and carry large loads.

Due to the time-sensitive operations that many implements are asked to perform, it’s also critical that implement tires are robust and resist damage. Timing is everything on the farm and downtime during key weather windows in seasons such as planting or harvest can have disastrous implications.

Finding the right implement tire is a balancing act, which is particularly noticeable when considering speed and load. With implement tires, as speed increases, load decreases, and vice versa—something that makes finding a tire’s sweet spot tricky.

Many tractors today can run at speeds up to 30 mph, while some will hit speeds over 40 mph. When selecting an implement tire, it’s vital to choose one that’s rated for the speeds it will travel. Using implement tires at speeds higher than they’re rated leads to heat buildup—the number one enemy of tires—which can cause unseen damage and increase the odds of tire failure.

Just as it’s important to operate tires at the appropriate speed, it’s also crucial they have the appropriate load capacity. Load capacity isn’t just the weight of the equipment itself—for implements like seeders, feed wagons, sprayers, or grain carts, it also factors in what it’s carrying, such as seed, fertilizer, or grain. Overloaded tires can cause soil compaction, reduce traction, and shorten tire life.

Tread patterns are another area that exemplifies the give and take of implement tires, as they must perform everywhere from moving on wet soils at low field speeds to hard asphalt and gravel roads at high speeds. 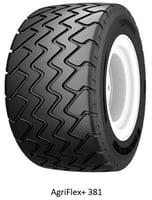 Implement tires have traditionally featured ribbed tread patterns with high rubber-to-void ratios. These types of tires excel in some applications, such as on the road. (No surprise, since they somewhat resemble passenger car tires.) The downside of ribbed tires is that they often struggle to gain traction in wet and muddy terrain. Furthermore, they have a tendency to plow and push through damp soil, which is bad for field health. Ribbed tire patterns are also more susceptible to stubble damage than their lugged counterparts.

Despite some of the commonly perceived drawbacks of ribbed implement tires, engineers are developing ribbed pattern tires to meet the needs of today’s farmers. For example, the Alliance AgriFlex+ 381 and 881 both feature unique zig-zag rib treads and are constructed with stubble-resistant rubber compounds that deliver much-needed traction and wear resistance in the field, while also improving the on-the-road performance ribbed patterns are known for.

The use of tires that have lugged patterns with deeper treads is becoming more common on implements. Lugged tires provide superior traction in muddy field conditions, better self-cleaning, and increased resistance to stubble damage. The knock against lugged patterns has been their inability to match the performance of ribbed tires on the road.

Similar to the advances in ribbed tread patterns, a new generation of lug-treaded implement tires is changing their perception. Tires like the Alliance AgriFlex+ 389 and 885 are optimized to deliver maximum performance wherever they’re operating, thanks to patterns that feature both directional and non-directional lug designs for in-field performance and large center blocks with optimal lug-to-void ratios for long service life and low rolling resistance on hard surfaces.

The rubber compounds used to make implement tires must also balance the many demands placed on them. Tires made with stubble-guard compounds formulated specifically to resist stalk damage and backed up by steel or Aramid belts are ideal for running through residue-laden fields. Alternatively, other rubber compounds are optimized for heat resistance and better suited to operating on paved roads and traveling at high speeds.

Implement tire compounds continue to improve to provide higher performance both in field operations and when roading.

Tire construction is one of the most important factors to consider when selecting an implement tire.

Bias-ply tires have long been the go-to choice of farmers, as they deliver reliable performance, boast affordable up-front costs, and are readily available from local dealers. They also feature stiff, strong sidewalls that fend off damage from rocks and stumps and provide excellent stability on hilly terrain—something for those not farming flat land to consider.

Despite the proven performance of bias tires, many farmers are turning to radials, which are remarkably well suited to the demands of modern implements. Radial tires are able to operate at lower inflation pressures, allowing them to produce a larger footprint for better traction and less soil compaction. Radials also dissipate heat better—offering a softer ride and lasting longer in mixed use than their bias counterparts, giving them an advantage on the road.

There is no one tire that will fill every need of every implement and application. Luckily, Yokohama Off-Highway Tires America (YOHTA) offers a broad range of application-specific implement tires in a variety of constructions to meet specific demands such as terrain, speed, load, and budget. Whether you’re looking for a burly bias, high-performance radial, or cutting-edge VF tire, contact your local YOHTA dealer or rep today to learn how you can keep your implement tires pulling their weight.