How to Choose an OTR Tire Tread Pattern

The tread pattern of an OTR tire is responsible for many of its characteristics, including the traction and flotation the tire provides and its resistance to cuts, chunks, wear, and heat. Selecting the right tire with a tread optimized for the conditions it will operate in is essential for maximizing a tire’s return on investment and can provide numerous other benefits, such as improved machine efficiency and productivity.

The rock pattern is the most popular tread pattern for OTR tires—they’re commonly equipped on earthmovers, graders, and loaders. The rock pattern is characterized by lugs arrayed in S- or Z-shaped sinuous lines with grooves between them that run from side to side of the tread’s face. As its name implies, rock pattern tires are designed for applications in craggy conditions where there is a high likelihood of punctures and cuts caused by sharp rocks. In addition to having a reputation for durability and wear resistance, rock patterns also deliver superb traction in taxing conditions.

Favorite rock pattern tires include high-tech Galaxy radials like the MGSR 200 and LDSR 300, along with the super-tough bias EXR 300 which features a particularly aggressive tread pattern notable for its large traction- and stability-boosting center blocks. 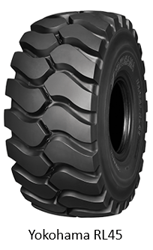 Traction patterns are often found on loaders, dozers, earthmovers, and graders working in applications that require serious traction (as their name suggests) and stability. Traction tires are directional and rely on numerous biting edges, enough voids between the rubber to allow the tires to dig in, and enough surface area to deliver high traction, reliable braking, and long service life in terrain ranging from soft soils to improved surfaces.

Tires from our premium Yokohama brand like the RL45 and RL52 are excellent examples of the classic traction pattern while the Yokohama RT31 is an innovative interpretation of the traditional traction tread pattern that delivers exceptional performance in soft and muddy terrain.

Block tread patterns are common on equipment like earthmovers and loaders operating in applications on hard surfaces. Block pattern treads consist of a variety of individual blocks, buttons, diamonds, chevrons, and other geometric shapes that excel on abrasive surfaces like asphalt, and concrete that would quickly grind away other types of patterns. Block tread patterns are available as both directional and non-directional, and their performance on wet ground/slick terrain will vary depending on everything from the arrangement of the blocks to the tire’s surface-to-void ratio.

Tires such as our recently released 875/65R29 Yokohama RB41 which has our newest technology or our classic RB31 and feature block patterns designed to deliver performance on hard and soft surfaces alike—standing up to harsh hard terrain and providing traction on soft, sandy surfaces.

As their name suggests, rib pattern tires—like our Galaxy Super Industrial Rib and Workstar—feature ribs that generally run parallel to the direction of travel. Rib pattern tires are known for their low rolling resistance and are most commonly equipped on free-rolling wheels on equipment like industrial tractors, backhoes, and finish graders.

Smooth patterns—like what is found on the Yokohama Y69 which was developed with input from industry-leading mining customers—are noticeable for their absence of an actual tread pattern. This makes them ideally suited for applications that prize durability and where traction is unimportant. Smooth tires are a common sight on compactors and rollers but also are frequently found on machines like loaders working in applications such as mining and material handling. Because there are no lugs on a smooth pattern tire, an abundance of rubber is used in their construction and the absence of any voids eliminates vulnerabilities that can collect puncture-inducing rocks and debris—all of which add up to long-lasting tires that are highly wear- and cut-resistant.

Tread Thickness For Cut- and Wear-Resistance

Tread pattern is just one trait that factors into the cut and wear of an OTR tire; another is tread thickness. There are three general classifications for the tread thickness of OTR tires:

The Tire and Rim Association assigns OTR tires a number that indicates the pattern and thickness of the tread.

The thicker the tread, the greater cut- and wear-resistance you can expect from an OTR tire. That said, thicker treads generate and retain more heat, the number one enemy of tires. Work with your tire dealer to determine the most appropriate balance for your operation, based on the distance your equipment moves, the environment it works in, and other variables.

The construction of a tire will also affect how a tire tread performs. Pneumatic OTR tires are available in two constructions: bias and radial. Radial tires place more tread on the ground than bias tires, which allows them to provide more traction. Radials also have greater impact resistance in the tread area, thanks to their flexible carcass and steel belts. Radials dissipate heat better than bias tires and, in general, are longer lasting. Lastly, radials provide a more comfortable ride.

There’s a lot to consider when purchasing OTR tires. If you’re unsure what the right OTR tire for your application is, your local Yokohama Off-Highway Tires America dealer or rep can help you find a tire with the right tread pattern, thickness, construction, and compounds for the terrain it will work in and job it will perform.