Tires vs. Tracks: Which is More Fuel Efficient

What is More Fuel-Efficient, Tires or Tracks?

Tractors are the engine of a farm, pulling everything from planting implements like seeders in the spring to hauling carts during harvest in the fall. Because tractors are the primary power source on the farm, the expense of keeping them fueled is significant—most years, fuel accounts for about 5% of a farmer’s overall costs. Given the considerable expense of fuel, even small differences can result in large returns—which begs the question, what is more fuel-efficient: tires or tracks? 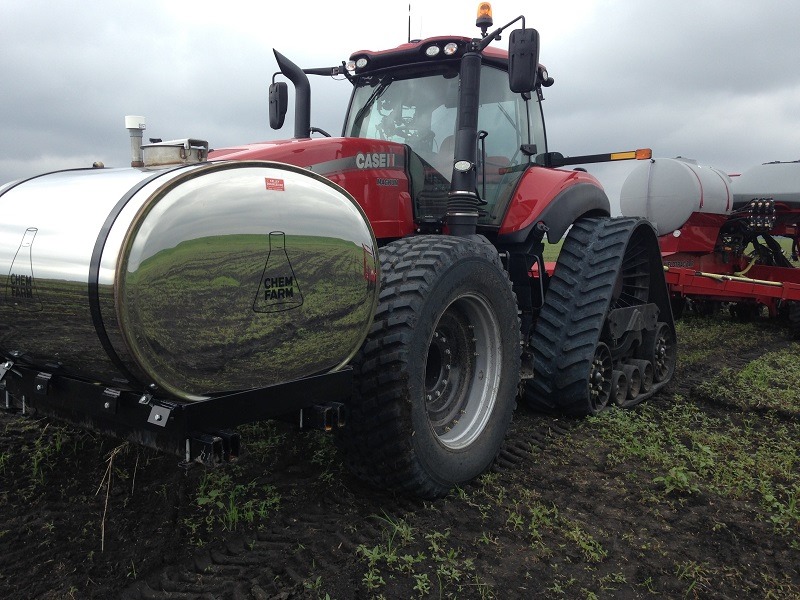 The University of Nebraska-Lincoln’s Nebraska Tractor Test Lab (NTTL) has made the most notable comparison of the fuel efficiency of wheeled tractors vs. tractors equipped with tracks. In 2012, they studied the fuel consumption of two tractors—a Case Steiger 600 and Case Steiger 600 QuadTrac—in a variety of field conditions and load scenarios.

On hard surfaces like asphalt and concrete, tires far surpass tracks in fuel efficiency. During the NTTL’s study, the tire-equipped Steiger 600 was almost a gallon per horsepower-hour more efficient when traveling at similar speeds and using approximately the same power as its tracked counterpart. The wheeled Stieger got 17.52 hp-hours per gallon, compared to the tracked machine’s 16.70 hp-hours per gallon.

The NTTL also tested the two tractors on dry wheat stubble immediately after harvest with a drawbar load of 21,000 pounds. Here again, the Steiger with tires shined, outperforming its tracked peer by more than a gallon—the tractor equipped with tires delivered about 14.79 hp-hours per gallon compared to the tracked machine’s 13.76 hp-hours per gallon.

The fuel efficiency differences between wheeled and tracked tractors closed when payloads grew. With the drawbar load increased to 29,000 pounds, the wheeled Steiger eked out a meager fuel efficiency advantage in the same dry wheat stubble, getting about 14.39 hp-hours per gallon compared to 14.09.

Tracks slightly surpassed the fuel efficiency when the field was tilled and the stubble plowed under. In these conditions, with a drawbar load of 21,000 pounds, the tracked machine got about 13.3 hp-hours per gallon, compared to the wheeled tractor’s 12.71. The gap in fuel efficiency only grew in moist conditions as the payload was increased. According to Roger Hoy, UNL biological systems engineering professor, and NTTL director, “When we went to the tilled field, the tracks started surpassing tires at 29,000 pounds." 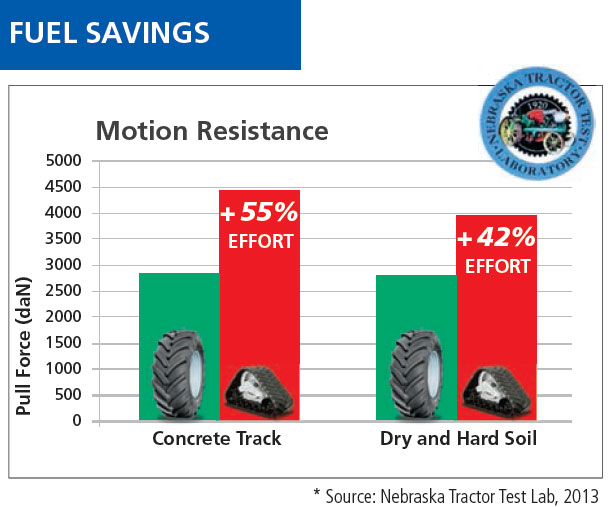 Why Tires are More Fuel Efficient than Tracks

Tractors equipped with tires are anywhere from 10% to 30% lighter than comparable tracked equipment and tracks have more moving parts, all of which add up to them requiring more fuel to propel themselves. Tires also have a lower rolling resistance than tracks, which allows them to travel at higher speeds, lose less energy, and increase fuel efficiency—particularly on hard surfaces.

Another consideration is the turns they make at the end of rows. Tractors using tracks can counter-rotate and make zero-degree turns, which leads to berming, soil disruption, and crop damage on the end rows. Consequently, many farmers using tracks will need to make wide, gentle turns (which can add mileage when farming substantial acreage) or come back through and level the area—either way, extra fuel is used.

Other Cost Differences Between Tires and Tracks

Rising diesel prices have fuel costs at the top of farmers’ minds, but there are a lot of other costs that go along with tires and tracks that can affect fuel efficiency and return on investment.

Tractors equipped with CTIS commonly cost less than similar tracked equipment and unlock the full potential of tires, maximizing their fuel efficiency. With CTIS, farmers can adjust the inflation pressure of their tires with the push of a button—adding air pressure for travel on the road and decreasing it for work in the field. According to Sally Brodbeck, owner of Precision Inflation, properly inflating equipment tires can improve overall fuel economy by 10% along with increasing the service life of expensive ag tires.

High-tech tires, like VF, are another way that wheeled equipment can extend its advantage over its tracked counterparts. VF tires can carry greater loads and travel at lower inflation pressure than the tires of the past—they can carry 40% more load at the same inflation pressure as a conventional radial or the same load at 40% less pressure. VF tires allow tractors to work more efficiently, spend less time in the field, and ultimately burn less diesel. Pairing CTIS with VF tires is a comparatively cost-effective way for farmers to maximize tractor performance, lower fuel costs, and improve their return on investment in tires.

Yokohama Off-Highway Tires America is committed to delivering VF tires for every piece of equipment on the farm—including our AgriFlex+ 354 for tractors, AgriFlex+ 881 for planters, AgriFlex+ 363 for sprayers, AgriFlex+ 372 for combines, and AgriFlex+ 377 for carts. This dedication ensures all your equipment can take advantage of the many benefits provided by VF tires, including improved fuel efficiency.

A new tractor equipped with a four-track system can cost 20% more than a comparable wheeled machine. Additionally, the undercarriage assemblies of tracked equipment require costly maintenance to keep them operating at peak performance, while tires simply require a pressure gauge and air.

When deciding between wheeled and tracked equipment, farmers need to consider whether the additional upfront cost of tracks pays off over its lifecycle. Tires offer numerous advantages over tracks—which are bolstered by the use of high-tech tires and CTIS—and offer anywhere from a slight edge to a significant advantage over tracks in fuel efficiency.

In the end, fuel efficiency comes down to more than just tires vs. tracks, however, equipping your tractor with the right set of tires is an excellent step to managing fuel expenses on the farm. To learn more about Yokohama Off-Highway Tires America’s (YOHTA) broad range of ag tires—including our innovative AgriFlex+ VF tires—and how they can benefit your operation, contact your local YOHTA dealer or rep.