Wheels or Tracks: Which is Better for Snow Removal?

Skid steer loaders (SSLs) and compact track loaders (CTLs) are two extremely popular pieces of equipment for snow removal. Both machines are super maneuverable, allowing them to operate in areas like tight parking lots, and are able to move snow in a variety of different ways—such as pushing, piling, and lifting. Both these machines excel at tough jobs and work in harsh conditions, but the question remains: is a skid steer or a track loader better for snow removal? 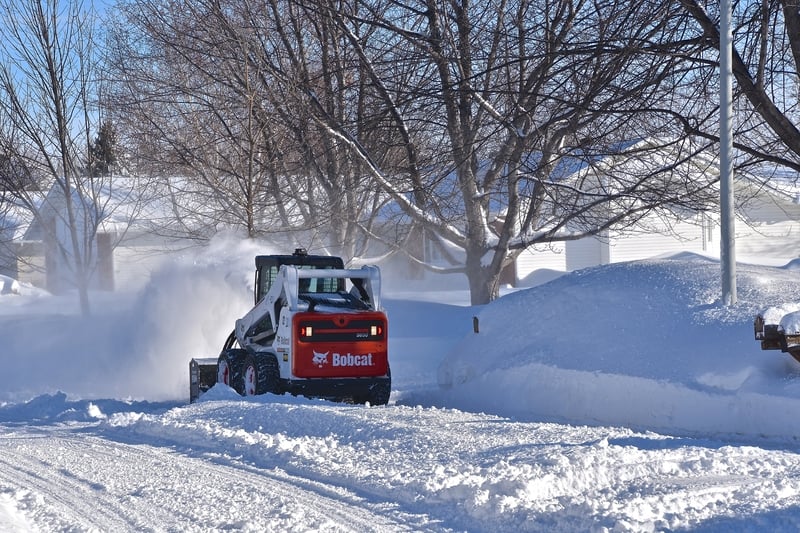 The four tires of a skid steer exert more ground pressure than that of a track loader, which allows the machine to apply more force to the bucket to push, scrape, and pick up snow. The light touch that makes tracks popular for soft-surface work in the summer inhibits their grip on snowy and icy surfaces, but switching a CTL to aggressive lug-type tracks can close the traction gap between the two machines.

Tires designed to work in the snow also provide the opportunity to improve equipment productivity. Traction-enhancing features such as large, snow-clearing tread-to-void ratios, aggressive tread patterns, and grip-enhancing sipes—like those found on our Alliance 550 and Galaxy Mighty Track ND—will almost always outperform tracks in the snow, even the new generation of tracks designed specifically for winter work.

Skid steers are able to travel at speeds up to 12 mph—considerably faster than comparable track loaders—which allows machines to gain momentum and roll over snow, rather than simply pushing through it. Radials further increase the performance disparity with their ability to dissipate tire-killing heat generated from traveling long distances and at high speeds (yes, heat is a problem for tires even in the winter), like when working in large lots or traveling between accounts.

Tracks are notoriously expensive to maintain and require regular upkeep and replacement— maintaining (and eventually replacing) a CTL’s bogie wheels, sprockets, and idlers all can add up to big dollars by the end of a long winter. Wheeled machines like SSLs simply do not face these extra costs of operation.

Remember to monitor the air pressure of your skid steer’s tires in the winter. Tire pressure can decrease one psi for every 10-degree drop in temperature. Track loader owners will want to take time to clean their machine’s undercarriage after operation to avoid incurring extra maintenance costs.

Skid steers excel on hard surfaces like concrete and asphalt—where the overwhelming majority of snow removal equipment operates—and will outlast tracks in this application. New tracks alone can cost up to twice as much as replacement tires, further adding to the high maintenance costs of tracked machines.

In addition to being more expensive to maintain than skid steers, track loaders are also more expensive to purchase in the first place, costing upward of 20% more than a comparable skid steer. It can take a lot of accounts, time moving snow, and multiple winters to make up the cost difference between machines.

There is one place where skid steers and compact track loaders are at a stalemate in regards to snow removal: available attachments. From brooms to blades to buckets to blowers, the list of available attachments for both SSLs and CTLs seems to grow every winter. Of course, with all their advantages, it’s obvious that skid steers are the right base for all the tools you need to do the job.

The skid steer offers significant advantages when it comes to snow removal applications as well as applications on hard improved surfaces such as concrete and asphalt. However, if you already have a track loader, you can still get the job done, although likely at a higher cost-per-hour of operation due to increased maintenance and productivity costs.

Yokohama Off-Highway Tires America, Inc. has a wide range of application-specific tires designed to give your skid steer an edge in the winter. Our steel-belted Alliance 550 MultiUse radial is a favorite for skid steers working in the snow, while our workhorse Galaxy Mighty Trac bias tire is a reliable performer on skid steers operating in even the worst winter weather.

Contact your local Yokoham Off-Highway Tires America, Inc. dealer or rep to learn more about our broad range of tires for snow removal.