Fuel is one of the largest expenses for a farm and while farmers can’t control the cost of fuel, there are some steps they can take to reduce the amount their tractors use—such as ensuring optimal wheel slippage and proper tire inflation pressure. In addition to improving fuel efficiency, optimal wheel slippage and proper pressure can lead to other cost-saving benefits such as decreasing time in the field, reducing yield-sapping soil compaction, and minimizing wear and tear on equipment.

Just how much can you save by improving farm equipment efficiency? A bulletin from Michigan State University Extension estimates that poor tractor performance wastes nearly 150 million gallons of fuel each year in the U.S. 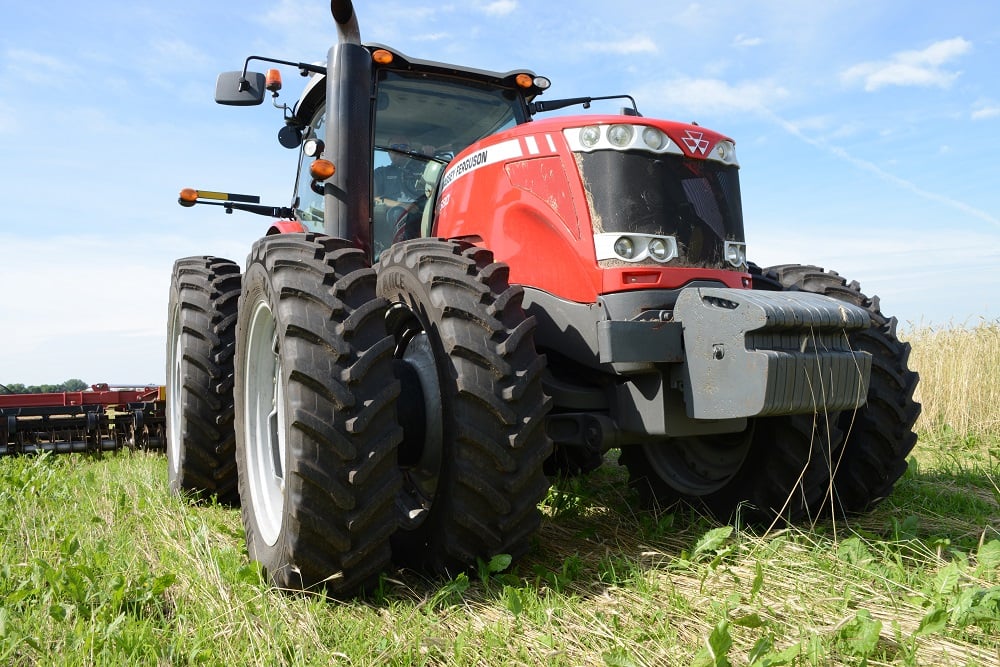 Tire slippage is when the tires turn faster than the ground speed of the tractor, and excessive tire slippage increases fuel consumption. It also leads to more time in the field and causes premature engine wear. Tire slip is also one of the easiest efficiency-robbing metrics to track, thanks to the wheel slippage calculators that grace the cabs of many modern tractors.

Tire slippage isn't a bad thing—some slip must occur for efficient operation—however, both too much or too little slip can increase fuel consumption. For every 1% past optimal slip, a machine loses an equivalent 1% in productivity, which leads to escalated fuel costs. In general, optimal wheel slippage is typically between 5% and 12%, although you should allow for more slippage when working with sandy and tilled soils and less slippage when operating on concrete or firm soils.

Ballasting is the common practice of adding weight to a tractor to ensure it efficiently transfers its horsepower to the ground, controls tire slip, and ultimately burns less fuel per unit of horsepower. Farmers can control wheel slip by adding or removing ballast, but beware: too much ballast can increase soil compaction, increase rolling resistance, and burn more fuel, while too little ballast can lead to excessive wheel slippage, inefficient transfer of horsepower, and once again waste fuel.

It’s always a good idea to work with your equipment dealer to properly ballast a tractor, but some general guidelines are:

Cast iron weights are convenient and are easily swapped in and out to accommodate different ballasting needs. They also don’t limit the performance of modern radial farm tires, which is one of the major drawbacks of adding liquid ballast to a tire.

The pressure a tire operates at has an enormous effect on its performance and can help keep fuel costs down. Unfortunately, many farmers aren’t paying attention to their pressure—a survey of Oklahoma farmers found that only 45% of tractor tires were within the recommended tire inflation ranges—which is bad news for cost-conscious farmers.

A study done by the University of California found that operating tires at “low/correct” tire pressures used 20% less fuel while providing additional benefits such as improved productivity, controlling power hop, and reducing soil compaction. A bulletin published by the ATTRA Sustainable Agriculture Program asserts that just one tire underinflated by 6 psi can increase fuel consumption by 3%.

The easiest way to ensure tractor tires are operating at the optimal air pressure is to consult the tire manufacturers’ speed, load, and inflation tables, regularly checking the inflation pressure of tractor tires, and adjusting tire pressure to the application. For example, a tire inflated to a higher pressure for roading won’t produce the same large footprint as one inflated optimally for fieldwork, which can result in a loss of traction, increased slip, and the use of more fuel. Similarly, a tire inflated to a lower pressure for the field will generate more rolling resistance and less fuel efficiency (and more heat!) than one inflated for roading.

The benefits of fine-tuning tire pressure to the application is one of the primary reasons for the growing adoption of central tire inflation systems (CTIS) on tractors.

Tire selection can also play a significant role in the fuel efficiency of a tire.

Radial tires—like our Alliance 550 MultiUse—produce a larger footprint than comparable bias-ply tires. In the field, the larger footprint of radials allows them to put more tread on the ground, which improves traction and leads to improved productivity and less fuel consumption. On the road, the lower rolling resistance and better heat dissipation of radial tires make them the more fuel-efficient option.

High-tech VF tires—such as our Alliance AgriFlex+ 354 and Alliance AgriFlex+ 372—can further help cut fuel costs. VF tires are able to carry up to 40% more load at the same inflation pressure as a standard radial tire, or the same load at 40% less inflation pressure. This allows them to put a massive footprint on the ground which improves flotation and traction and reduces fuel loss through slippage.

If you’re trying to pinch pennies by putting off investing in new tractor tires, it can cost you. Not only are you missing out on the improved productivity and fuel efficiency offered by radials and VF tires, but as a tire loses its tread, it also loses its ability to create traction, and, in turn, burns more fuel.

Contact your local dealer or Yokohama Off-Highway Tire America, Inc. rep to learn about all of our excellent ag tire options—including our line of AgriFlex+ VF tires—and how they can help cut fuel costs and put more money in your pocket, not in your fuel tank.