Farm Equipment and Dinosaurs Exert a Heavy Toll On Soil

Over the past century, mechanization has dramatically improved crop production and efficiency; however, the size and weight of farm equipment have also grown alongside yield and productivity. A new study found that the weight of modern farm machinery rivals that of sauropods, the largest animals ever to have ever lived on land. 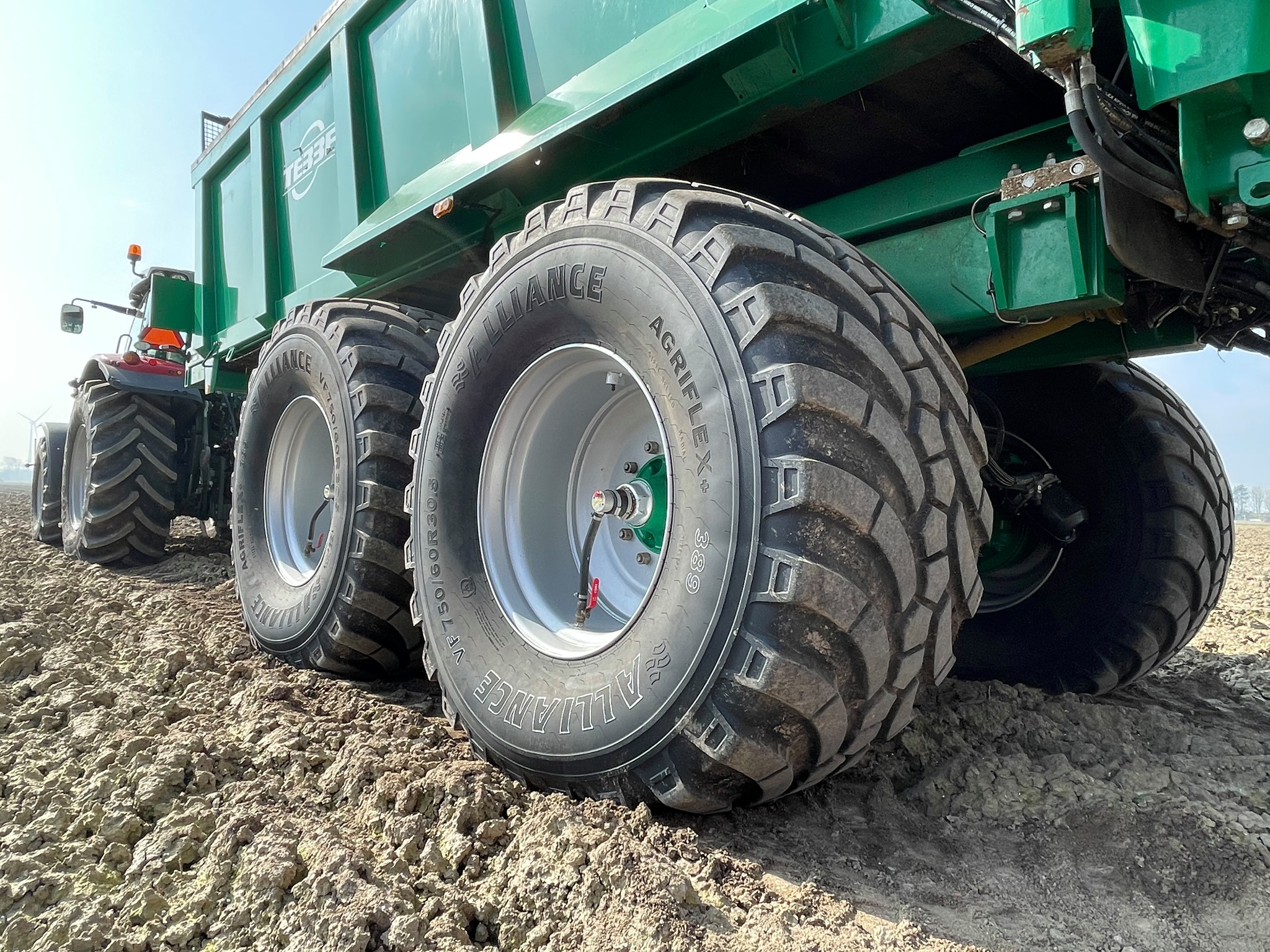 The wheel loads of combine harvesters grew roughly 65% between 1989 and 2009—and today, fully loaded combines can weigh upward of 80,000 pounds. That is as much as a small herd of elephants and approaching the weight of the heaviest animals to have ever roamed the earth, sauropods, which are believed to have tipped the scales at around 80 tons. Tractors have also been super-sized over the years; a top-of-the-line tractor today weighs nearly ten times more than it did in 1960, stands taller than an African elephant, and outweighs some sauropods.

Combines and tractors are just an example of some of the super-heavy equipment that works in the field today. Giant grain carts, huge tankers, and even semi-trucks are all common sights on today’s farms.

Whether it’s enormous farm equipment or massive dinosaurs, the movement of heavy tracks, tires, hooves, or feet on the ground can have a significant impact on the soil. Soil can only withstand so much pressure before becoming compacted—that is, the pores and pathways in the soil responsible for allowing air to circulate and water to reach plant roots and other organisms are disrupted. Soil compaction has a number of detrimental effects on the farm, including lower yields and higher operating costs.

Mammoth machinery and creatures have an especially notable effect on the soil below 20 centimeters (8 inches). This is underneath the normal tillage depth on most farms and, in most cases, it will require deep-zone tillage to break up, which is fraught with its own problems, like hitting tile lines, digging up rocks, and further compromising soil structure.

A paper from researchers at North Dakota State University and the University of Minnesota theorized that deep wheel-traffic compaction may reduce two-year yields by 21% and found that farmers in North Dakota and Minnesota may lose $587 million over two years for every 10% of the land that is affected by compaction. As for sauropods, researchers can only speculate how they dealt with soil compaction and its impact on them.

Sauropods have been extinct for 65 million years. However, both they and today’s gigantic farm equipment employed a similar method for fighting soil compaction: large footprints that disperse their weight and reduce their impact on soil. 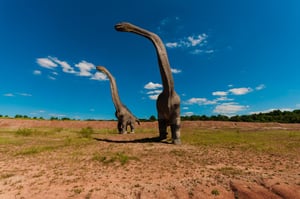 Sauropods: Scientists believe that sauropods evolved with increasingly larger feet to help them avoid sinking in soft soil. This is similar to the evolution of footprint size seen in animals like camels—the broad, leathery fat pads on their feet have been suggested to have developed to help them disperse their weight over a larger surface area to keep their feet from sinking into loose sandy soil. Sauropods have been found on every continent and, like today’s farm equipment, are likely to have moved across all types of soil.

Farm equipment: As farm equipment has grown in size, tires have evolved to produce larger footprints, spread the weight out over a greater area, and reduce the impact on farmland. Radial tires have become an increasingly common sight on today’s farms as they create a broad, flat footprint—15-25% larger than a bias tire. High-tech VF tires offer another innovative solution for battling compaction and can operate at up to 40% less pressure while carrying the same load as a conventional radial tire.

Other Tools for Avoiding Soil Compaction

The massive weight of sauropods and the loads transmitted through their feet is likely to have damaged the ecosystems that produced their food. However, sauropods were one of the most successful groups of dinosaurs, with 200+ known species of sauropods that existed for a span of over 140 million years. Some scientists conjecture that sauropods stuck to well-traveled paths while grazing, using their long necks to reach nearby vegetation and limiting compaction to certain areas.

Controlling traffic—i.e., sticking to particular paths in the field—is a popular strategy for limiting soil compaction on the farm. Because 75%-80% of soil compaction occurs on the first pass, traffic in established wheel tracks causes minimal additional impact. In well-planned controlled traffic fields (CTF), anywhere from 65%-80% of the ground is a non-traffic area.

The Importance of Inflation Pressure

No matter what type of tire you’re using or the strategy you’re employing to avoid soil compaction, one of the best and easiest steps you can take to protect your soil is to run your tires at the proper inflation pressure. Inflation pressure corresponds to the pressure exerted on the ground—for example, a tire running at 20 psi exerts roughly 20 psi into the soil (even if the machine it's supporting weighs 20 tons!). Consult your tire manufacturer’s speed and load tables and set your tires to the lowest recommended inflation pressure. In addition to reducing soil compaction, properly inflated farm tires provide better traction, improve fuel consumption, deliver a better ride, and reduce wear.

From low-pressure radials to high-tech VF tires, Yokohama Off-Highway Tire America’s (YOHTA) Alliance brand has a compaction-reducing solution for nearly every piece of equipment on the farm. As farm equipment continues to evolve—getting larger, more powerful, and increasingly advanced—so do our tires. Contact your local YOHTA dealer or rep to find out how Alliance is keeping pace with today’s farm equipment and how your farm can benefit by using Alliance tires.