At Crystal Valley in Madelia, Minnesota, Nik Samuelson has put Alliance flotation tires to the test on eight of the 11 TerraGator 9300s he oversees as shop coordinator. The remaining three will be replaced once the current tires of a different brand wear out.
He plans to replace them with either the Alliance 376 Multistar flotation radials he trusts or the new Alliance Agriflex+ 377 VF flotation radials he has been sampling for the past year.

The good news: he figures he won’t have too long to wait. 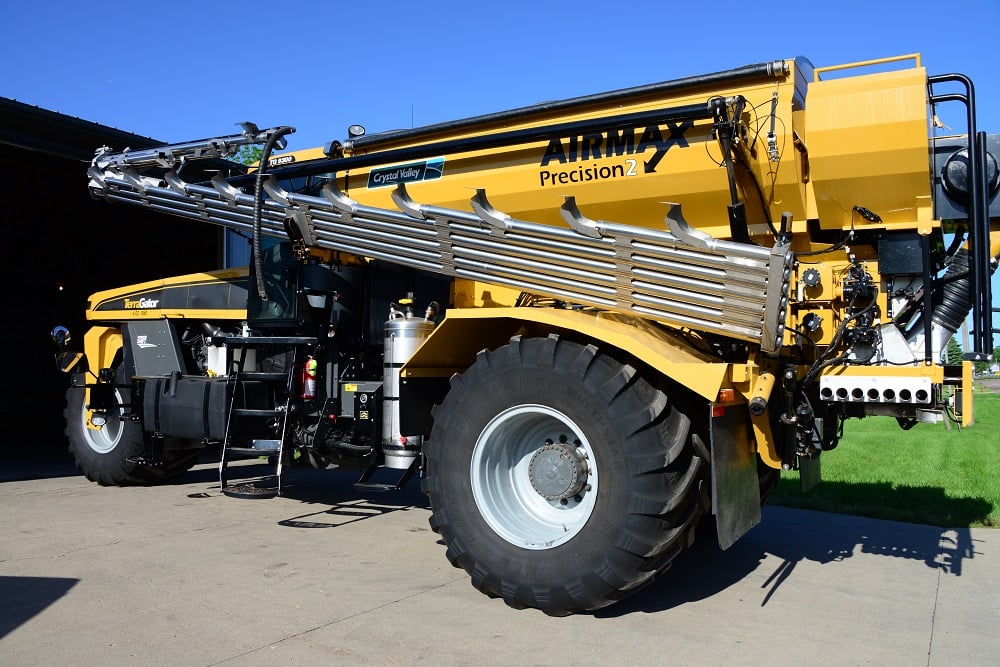 We’re getting two to three additional seasons out of a set of those Alliance tires for well under the cost of what you’d pay for a competitor tire. It’s really, hands down, a no-brainer.

Samuelson has over 1,500 hours on his Alliance 376 Multistar radials. He expects to see as many as 400 more hours on them before they need to be replaced. That’s a large jump over the average of 500 to 550 hours seen with other brands. By that time, the competitors’ tires typically crack at the junction where the lug meets the sidewall or get pecked to death by crop stubble, he says. 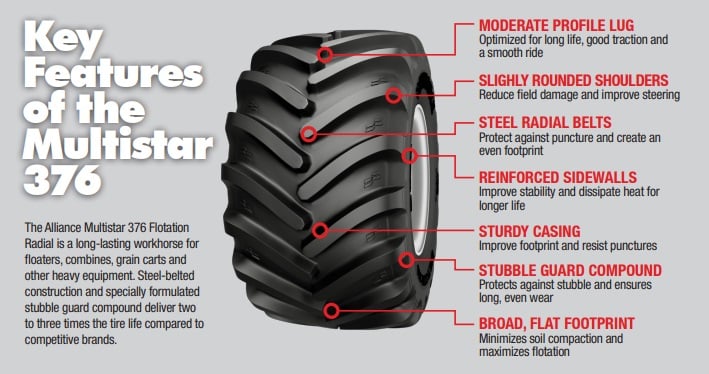 Samuelson says the Alliance 376 and 377 both drive well over the road and in the field. The smooth ride of the flotation radials helps operators cover the distance between fields. The flexible sidewalls—especially of the Agriflex+ 377 VF radials—reduce the vibration that can take a major toll on the floaters’ fasteners and hydraulics.

The wide footprint of the 376 radial and the even bigger footprint of the Agriflex+ 377 VF radial flotation tire also minimize soil compaction. Compaction is a concern for both Crystal Valley employees and farmers during the scramble to spread heavy loads of fertilizer without creating impenetrable zones in the soil affecting crop yields for years.

The Alliance Agriflex+ 377 is a very high flexion (VF) tire, with extra-strong, extra-flexible sidewalls that can be operated at even lower inflation pressure than the 376s. VF technology provides operators with a choice of benefits:

Samuelson says reducing the inflation pressure (and compaction pressure) has worked well for his team, and he is interested in switching more of his TerraGators over to the Agriflex+ 377. “I think [buying more 377 VF radials] would be our next focus, but right now, it’s really hard to switch away from what you know is working,” he points out.

Samuelson knows he’s not alone. He sees how popular Alliance tires have become in his area, where every season is a race to make the most of the rich prairie soils. Custom applicators don’t have a moment to waste.

“I’m also seeing a lot of our neighbors’ TerraGators with these tires on them,” he says. “It’s pretty apparent they’ve been switched over because the original tires on there were worn out, so I think others are figuring it out, too.”

Click here for a printable version of this testimonial.