Picking Up Straddle Carrier Performance with the Yokohama RR42

About 90% of global trade is carried out over waterways and the quick turnaround of products from sea to the ground, and vice versa, is essential for productive markets. Helping keep cargo moving efficiently is a variety of equipment used to load and unload goods. Straddle loaders are unique pieces of equipment that are particularly adept at transporting containers short distances (such as around a port, terminal, or depot) and are becoming increasingly popular. Driving the adoption of straddle carriers is their ability to fill the roles of multiple pieces of equipment—like a crane, truck, and forklift—along with the flexibility they offer to locations with limited space.

Tires play a significant role in the performance of straddle carriers and the right tires can give their performance a lift while taking a port’s performance to new heights. 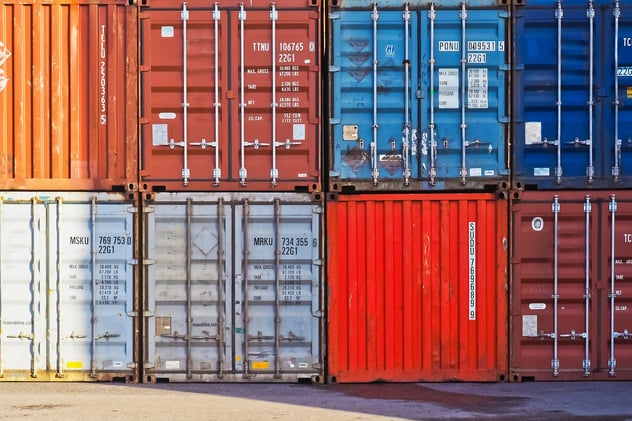 What is a Straddle Carrier?

A straddle carrier is a specialized piece of equipment for handling containers. These wheeled machines “straddle” a container, picking it up and moving it in their “belly,” as opposed to conventional trucks that require a crane or forklift to load and unload containers from their beds.

Today’s straddle carriers commonly carry loads up to 60 tons, are able to lift up to two full containers simultaneously, and are often capable of stacking containers up to four units high. All of this adds up to a machine ideally suited for navigating busy, tightly packed ports and terminals. 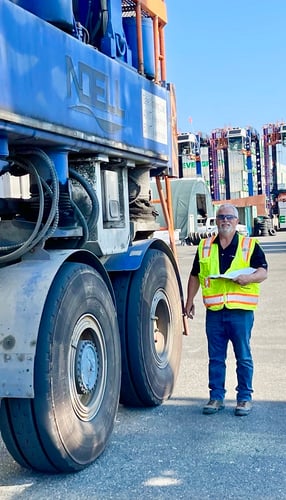 Straddle carriers are specifically designed for intermodal applications—they’re engineered to move containers over short distances within areas like ports, terminals, and depots, and often play an essential role in the quick and efficient loading and offloading of large ships or trains. A straddle carrier’s ability to pick up containers and transport them to their proper place in the area without the need for fixed equipment like cranes and rails and eliminating the need for trucks and forklifts makes it both an affordable and effective solution.

Just because straddle carriers aren’t traveling long distances doesn’t mean that they’re cumbersome pieces of equipment. Straddle carriers can travel more than 20 miles per hour—after all, time is money—and are able to deliver containers to places other permanently placed port equipment cannot. New machines, though similar in size and capacity to older ones, are being asked to operate at consistently higher speeds to keep up with record-breaking cargo and help avoid the logjams that wreak havoc on the supply chain.

Stacking containers is another important function of straddle carriers and their ability to stack up to four units high makes them invaluable at busy destinations with limited space that need to keep goods flowing. A 2012 working paper for the National Bureau of Economic Research found that each day of shipping delay cost between 0.6% to 2.3% of the value of the goods on board a given ship. Consider the cost of the news-making logjam at the port of Los Angeles (the U.S.’s busiest port) where, in September, wait times jumped to 8.7 days (up from 6.2 in mid-August) and the number of ships stuck waiting just to enter it climbed to more than 70.

The mobility of straddle loaders also makes them a key piece of equipment for loading containers on other types of transportation, facilitating the rapid movement of containers recently unloaded from ships onto waiting trains and trucks. Port congestion is a common problem that results, in part, from the rapid increase of container ships—which have grown 1452.68 % in the last 50 years—and can cost a business valuable time as well as increase expenses like fuel and labor. It’s estimated that seven of the U.S.’s ten busiest ports by volume face congestion regularly.

The Challenge for Straddle Carrier Tires

Straddle carriers ask a lot of their tires, especially when you consider these machines do everything from carrying loads pushing 60 tons and traveling at speeds more than 20 mph to operating on hard, hot surfaces that are particularly tough on tires. Straddle carrier tires need to maximize machine uptime to keep these valuable machines working, deliver high performance at both high and low speeds, and allow them to maneuver in crowded container yards. They must also handle heavy loads, provide a stable platform, and resist tire damage like cuts and punctures. 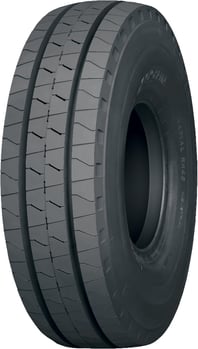 Tires like our steel-belted Yokohama RR42 are designed to deliver the performance straddle carriers need to keep pace with the flow of goods at the world’s busiest ports, terminals, and depots. The RR42’s radial construction and deep, circumferentially grooved tread pattern allow it to travel at high speeds, cover long distances, and work 24/7 without building up tire-killing heat. Additionally, the steel-belted radial construction of the RR42 along with its extra-sturdy hexagonal bead provides more lateral stability than comparable bias-ply tires—an important characteristic considering straddle carriers can top 50 feet in height.

Radials also outperform bias-ply tires in terms of operator comfort, an increasingly important factor as ports, like many other industries, are facing labor shortages. Simply put, the RR42 delivers exceptional total cost of ownership and keeps ports, terminals, and depots (and the businesses that depend on them) productive and profitable.

Port operations will continue to adopt equipment that improves productivity and eases congestion, turning to equipment that’s more maneuverable, able to carry larger loads, and capable of traveling at faster speeds. As they do, our Yokohama and Galaxy brand tires will keep pace, providing application-specific tires with a low total cost of ownership that are engineered to keep operations safe, reliable, efficient, and productive.